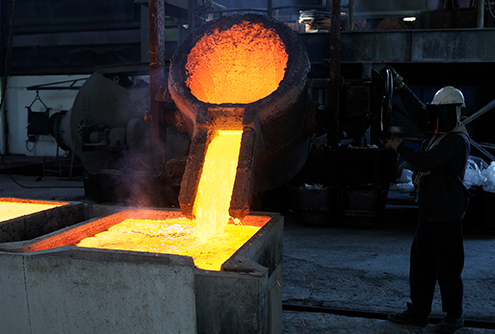 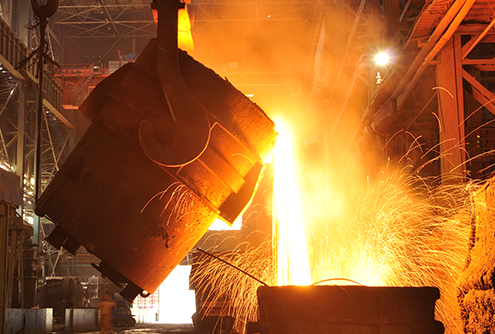 Properties of vermiculite, such as high melting point (1350 ºС), low thermal conductivity, the neutrality of the interaction with the molten metal, identified the possibility of its use for casting iron and steel.

Vermiculite in paper bags down on the bottom of the molds before casting the melt. When filling molds with metal, paper burns, vermiculite rises to the surface and covers the profitable part.

This allows you to dramatically reduce heat loss and increase the residence time of metal in liquid state.

Piping in bars, warmed in a manner fully displayed in the profit and underneath is a dense, healthy metal.

Determination of the chemical composition of the metal cross section of the ingot shows the lack of phase separation zones, due to specific crystallization in vermiculite shirt.

Vermiculite is used as a swollen insulation filling at insulated surfaces from -260 to 1100 ºС.

Thermal insulation products on the basis of expanded vermiculite should be used in isolation units with a working temperature of 900 – 1200 ºС.

Heat insulating vermiculite board is widely applied in isolation :

In the high-temperature and chemically active media, primarily occurring in the metallurgy and foundry, the inside of the buckets, stoves and other items to protect lining – the laying of a protective layer of refractory, insulating and chemically resistant material.

That is, chemical inertness, low thermal conductivity and high melting point (1350 ° C) has expanded vermiculite, which ensures its use as a lining material in the manufacture of iron, steel and nonferrous metals. In this case, the use of vermiculite, more preferably in comparison with asbestos – due to the lack of toxicity when heated, and a higher melting point and perlite – due to higher melting temperature, absence of caking, greater durability and longevity of seeds.

As shown, the lining of the vermiculite provides increased output of steel castings by 9-11% as compared with other lining materials.