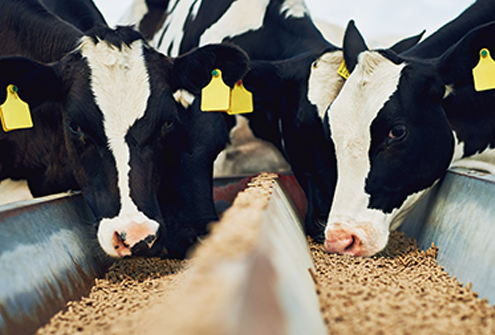 Vermiculite has been used for several years in feeds, e.g. for conservation of silage or in cattle, horse and poultry breeding.

Vermiculite is mixed with propion and formic acid which produces a granulate with a fungicide effect which improves the fermentation process.

Due the property of vermiculite to bind large quantities of fluids (up to 600 %), rinsing is prevented as takes place when using liquid acids for example.

With the use of this feed substrate, the formation of mould and the produced toxins is prevented.

Both substances can be mixed with each other using screw-conveyors.
Vermiculite is consumed by the animal as part of the silage and supports the intestinal flora in the digestion process. The grained structure of vermiculite helps to release the nutrition. Furthermore, vermiculite prevents diahorrea and provides valuable minerals.